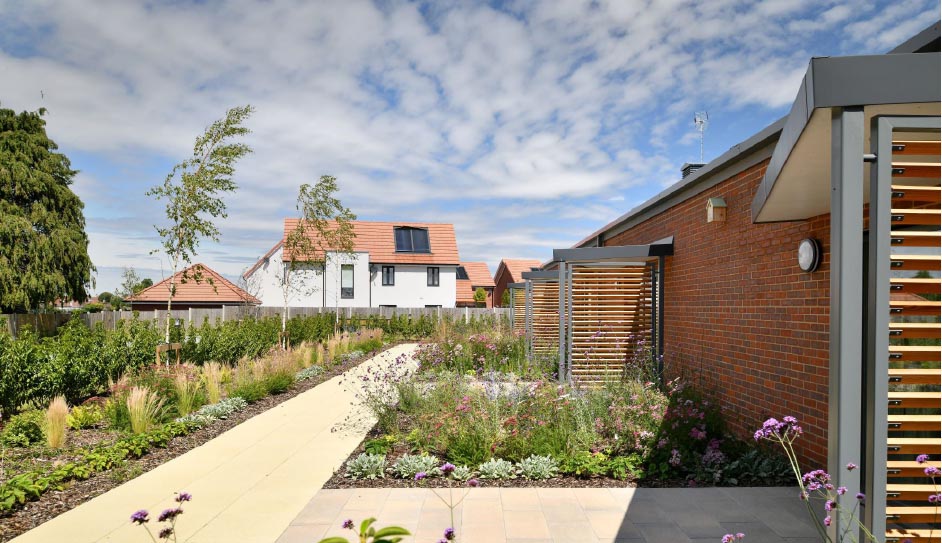 Whilst ‘hospice’ is a word that can conjure up thoughts and feelings around death, Havens Hospices is trying to dispel those myths so it can provide more care for more people. Fair Havens originally opened its doors in 1983, in a converted house of Chalkwell Avenue, Since then, the hospice has cared for tens of thousands of local people from across Southend, Castle Point and Rochford, either within the In Patient Unit, through its Hospice at Home Service or other
out-patient style services.

Family – and those people important to the patient – are integral to this care too. Countless loved ones have been supported both pre and post bereavement through counselling and group therapy sessions.
When Fair Havens moved to its new, £17.5 million purpose-built hospice in March 2020, the charity had big plans to expand its care for the community. The first patient was admitted on 9th March, and two weeks later the Covid lockdown restrictions took hold.
However, despite the pandemic, Fair Havens continued providing care, both within the hospice and in the homes of patients who wanted to avoid going into hospital at the end of their life. In fact, demand for its Hospice at Home service increased by 40% during the first few months of the pandemic. In the first year of the hospice being opened, it actually cared for 80% more patients than the previous 12 months.

One of those patients is Garry Lowen. Garry and his wife Penny run the Gleneagles Guesthouse in Southend, an 18-bedroom Victorian guesthouse and tearoom. The 63 year old chaired the Southend Carnival Association, Thorpe Bay Rotary Club and many mayoral charity committees, all of which have raised money for Havens Hospices at some point during his tenure.
In April 2021, Garry was diagnosed with motor neuron disease, and turned to Fair Havens for support shortly afterwards. He has stayed at the hospices In Patient Unit in Prittlewell, and regularly visits the Hub – an outpatient-style service for various treatments, therapies and group activities.
Garry says, “It was a huge shock when I was diagnosed with motor neuron disease. We’d just spent 18 months trying to keep our business afloat, I'd also had COVID and I had nothing left in the tank to take the diagnosis. I was completely burnt out. I quickly decided that I needed to engage in services because it’s not only about me - it’s about my wife. Fair Havens came to see me and I wouldn’t be here today if they hadn’t.
“The support I've had from Fair Havens has been outstanding and has given me renewed confidence that I can still do things.
My legs and my hands might not be working but coming here has given me a huge amount of confidence in myself. I felt like I was a person with two heads when I was diagnosed and nobody would want to talk to me.
“The first time I had a chat with the Doctor at Fair Havens,
they spent an hour listening to me tell my story which I'd never had before. An hour with a Doctor who’s not looking at their watch! Since then I've had counselling and physiotherapy which have helped me enormously. Without Fair Havens I’d probably still be sitting in the chair at home, because I got to a point where I didn’t think there was anything I could do, but they’ve made me see that I can.
“I became involved in the hospice’s Nature Through Therapy Group which has been a lifesaver for me. It’s given me something to look forward to, something where I can use my skills and my network of people to support us. We have a laugh together and support each other.
“I've brought in the Rotary Club to build planters, I've had compost and tools delivered, and we’ve now got a plan of what we’re going to plant. It’s exciting to be involved at the beginning, something that will be a legacy for other people so when I can’t do it anymore, it’ll be in good shape so other patients at Fair Havens can take it forward.
“I wasn’t frightened at all about coming to the hospice.
I understood that Fair Havens was as much about wellbeing as end of life.
I want to make the most of what time I've got and Fair Havens is enabling me to do that. I'm very grateful for what Fair Havens has done for me, and all my family and friends can see the difference.
“You never know when you’re going to need the help of a hospice like Fair Havens. Hopefully you won’t, but the important thing is to support its work because otherwise there’ll be lots of people in the community who will not have a positive end of life experience.”
Fair Havens is part of Havens Hospices which also incorporates Little Havens, children’s hospice services at its building in Thundersley and within the community. The care that Havens Hospices provides to local families is entirely free of charge, but this only happens because local people support the charity – through making donations and gifts in their Wills, taking part in events or the Lottery or making purchases at our 23 charity shops.