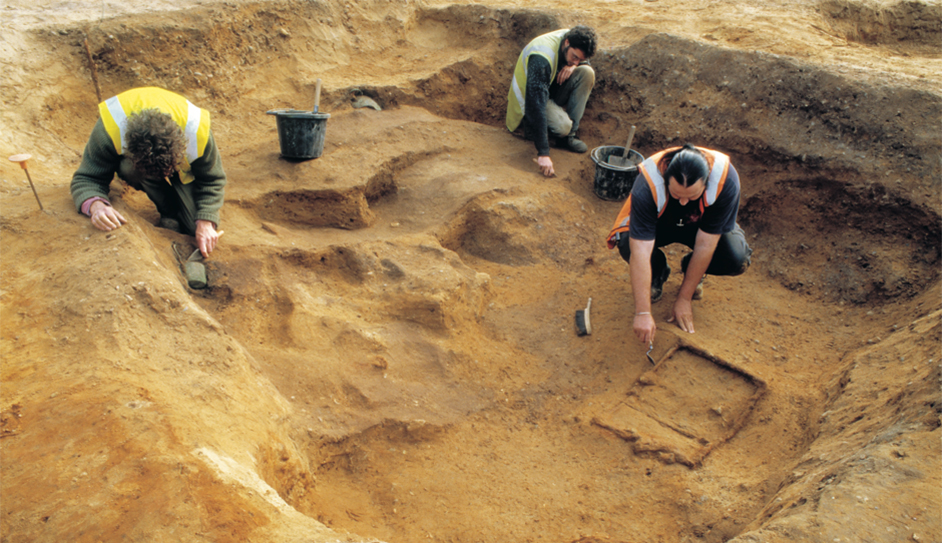 In 2003, Museum of London Archaeology (MOLA) was contracted by Southend Borough Council to carry out an archaeological investigation ahead of a road widening scheme at Priory Crescent, Prittlewell. A chance decision to move a trench a little to the left led to the extraordinary discovery of an Anglo-Saxon princely burial chamber.

The first object to be discovered was a beautiful copper-alloy hanging bowl found in its original position, hanging on the wall of the chamber grave. By the end of the excavation an entire burial chamber had been revealed, with many other complete objects found hanging or placed in their original positions.

The Prittlewell Burial is the earliest Anglo-Saxon princely burial in the UK for which we have scientific dating evidence, dating the burial to AD 580s-590s. This means that it cannot be the grave of King Saebert, as earlier thought, as he most likely died much later. What makes the Prittlewell Burial particularly significant is that it is the only Anglo-Saxon burial for which we can be certain that the deceased was Christian. The deceased, a male, was found with two gold crosses, an unequivocally Christian symbol, placed over his eyes. These are a unique find in England and hard to parallel elsewhere in the world!

Many of the objects found in the chamber grave are indicative of a high status individual. The wooden lyre has inlaid Sri Lankan garnets and the copper-alloy flagon was sourced by pilgrims to the shrine of St. Sergius in Syria. The ‘prince’ was also found with two gold Frankish coins known as tremisses and a magnificent gold belt buckle.

Years of research by MOLA have shed new light on the Anglo-Saxon world and have put Prittlewell on the map as an important centre in the East Saxon kingdom. The finds from the burial have now returned to Southend and are on permanent display in the newly refurbished Archaeology Gallery at Central Museum on Victoria Avenue. Admission is free.