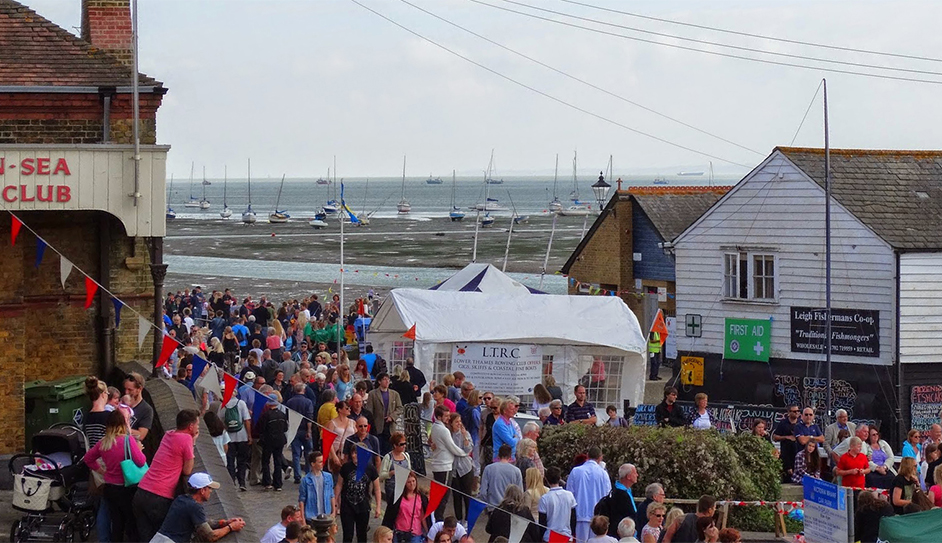 The origins of The Old Leigh Regatta are lost in the mists of time but there are faded photographs dotted about the public houses in the old Town which depict sailing races which too place as part of its festivities almost a century ago.

By the early 1950s the event had become a national treasure with the local police taking part in the annual football matches on the mud and a greasy pole competition with an old ship’s bowsprit reaching out over the water from Bell Wharf.

Traditionally run by the scouts

Traditionally, the event was run by the Scouts over two days at the end of summer. It was the various Scout group’s annual opportunity to showcase their talents and raise much needed funds to keep their sailing boats afloat. In those days, everyone in the old Town pulled together to make the Old Leigh Regatta the biggest and best event of the year with dozens of stalls littering the car park of the Peter Boat, welly-hoying on the beach at low tide and a cockle eating competition by the Mayflower fish & chip shop. Somehow the greasy pole had migrated along the cinder path and became a perpendicular test of endurance and strength whilst the bowsprit was now used for public pillow fights between differing factions of Scouts from the Old Town.

Since 2015 the Old Leigh Regatta has been run by the Lions Club of Leigh on Sea in conjunction with Scouts from the 3rd Chalkwell Bay and 4th & 6th Leigh on Sea Groups together with other local volunteers. Some might suggest that the advent of risk assessments and event management plans has heralded a quieter and more subdued era for the Regatta but whereas health and safety issues might have put paid to the reckless antics that took place in the past, the Old Leigh Regatta is still as vibrant and exciting event as ever, with plenty of activities to keep those of all ages occupied and entertained.

This year, the Old Leigh Regatta will be held on Sunday 15th September. There’ll be five stages areas with varied entertainment programmes ranging from local bands through singing Princesses to salsa dancers and barbershop singers. There’ll be children’s entertainment and competitions, real ale bars, food stalls, barbecues and a host of competitions including sailing races, the traditional tug-o-war, cockle-eating, welly-hoying and a scouts’ crazy kitchen.

The day will start at around 11.00 am, then its take your pick – try your hand at rowing a skiff with the Lower Thames Rowing Club, watch the sailing races from Victoria Wharf or visit one of the historic little Dunkirk ships, the Endeavour, moored by Bell wharf, where the Hoy Shanty Crew plan an impromptu performance of sea songs around high tide.

To add to the colour and atmosphere, the Crooked Billet and Peter Boat pubs will independently be providing live entertainment from local bands over the weekend and through the generosity of C2C, there will be free parking behind Leigh-on-Sea Railway Station on Sunday.

For more information about Leigh Regatta 2019,