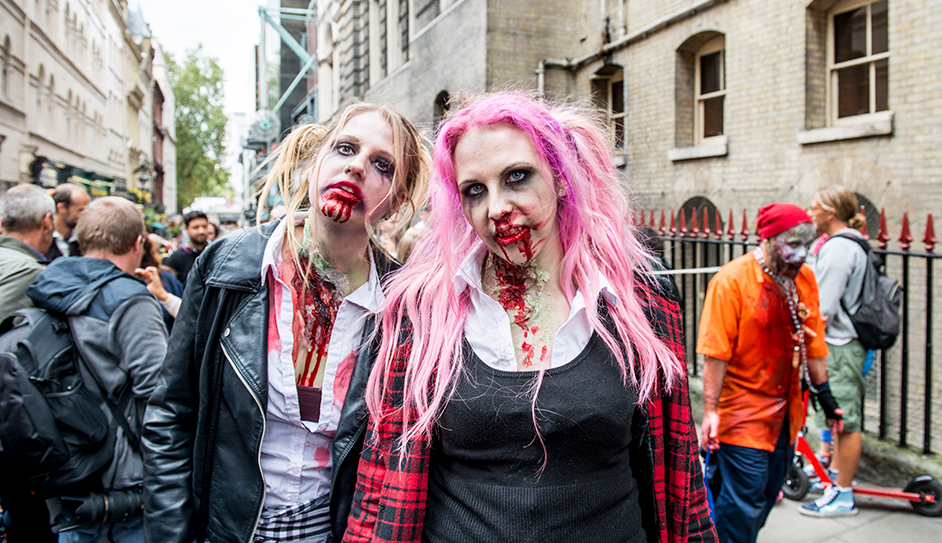 “Bite back” against homelessness with apocalyptic fundraiser, shuffling into Southend on 5 October 2019…

Inspired by the horror films of George A. Romero, World Zombie Day is a charity fundraising event that was incepted in 2006, created to help fight world hunger and homelessness. The first ever WZD event was staged in the iconic Pittsburgh shopping mall, setting of the 1978 zombie classic Dawn of the Dead.

Since then, the event has literally exploded into a global phenomenon. More than 50 cities play host to zombie parades in October every year. London (since 2008), Los Angeles, Hong Kong, Paris, and Tokyo are just some of the locales that see thousands of dresser-uppers gather on an annual basis, stumbling along on organised routes, and sporting grisly make-up and creepy costumes.

Despite its growing popularity, the zombie bug had never spread to South Essex…until now. Reaching out to the official WZD organisers for support, Leigh-on-Sea residents Vanessa Daly and Stephen Daultrey (of rock band Okuri Okami) decided to create the inaugural World Zombie Day-on-Sea, which will take place in Southend on Saturday, 5 October 2019.

The duo’s aim is to raise money for Charlie Boy’s Angels, a local charity supporting homeless people with pets. Charlie Boy’s Angels were chosen for the occasion after winning a poll on the event’s official Facebook page, accruing an astonishing 1,409 votes in just four days.

There are two parts to World Zombie Day-on-Sea. The event will kick-off with a sponsored zombie shuffle through central Southend, in which participants of all ages are invited to dress up as zombies for a fun afternoon stroll.

This will be followed by a charity gig in the evening, at the seafront venue Chinnerys. Four bands have been confirmed to play: local metal heavyweights Walk in Coma, London sci-fi rockers Death Ingloria (who mix animation with music), humorous death metallers Grave Existence, and Okuri Okami, an instrumental band revered for their atmospheric shows. All profits go to charity.

If you want to take part in World Zombie Day-on-Sea, or if you’re a business looking to get involved in sponsorship of the event or donate prizes, please contact Vanessa Daly on ness.daly@gmail.com or Stephen Daultrey on Stephen.daultrey@gmail.com, or search for World Zombie Day On Sea on Facebook for more details.